Music and Comedy Kick Off 2019 at FCP 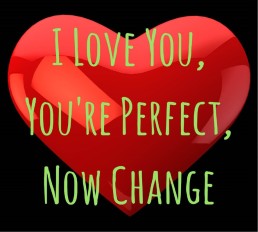 Flint Community Players chose a comedy to salute the new year with their production of the Joe DiPietro and Jimmy Rodgers musical I Love You, You’re Perfect, Now Change. Thursday’s opening found a decent crowd ready to brave the frigid temps for which they were rewarded with songs and laughter in this fast-paced revue.

With a theme centered around dating and relationships, the show unfolds as a series of vignettes that begin in Act I with all the aspects of meeting the right guy or gal and the snags that can surface in that attempt. Act II serves up the whole marriage experience from the wedding to parenthood all the way to life after spouse.

Director Todd Clemons brings a cast of twelve to the stage and mixes them up from bit to bit. It’s cute and it works well. There is a theme of blue that pervades the show as it opens and closes with the cast dressed in various colorful shades. These moments also bring opportunity for full chorus harmony, nicely done and deftly handled.

We won’t speak to every scene (there were a lot), but there were standouts that we don’t mind raving about a bit. Setting the pace and tone from the jump are Christopher Dinnan and Rebecca L. Pauli as they decide on their first date to fast forward through to the end of their relationship all in one meeting. They end with “We Had It All” – clever!

Next we really chuckled as two wallflowers, Gil Hall and Lauren Kondrat, bashfully tried to schmooze with each other while imagining themselves as “A Stud and a Babe”.  And Dinnan and Brienna Hickmott were adorable and funny as they watched a “Tear Jerk” movie he really didn’t want to go to.

The chorus entertained us again at the end of Act I with the musical number “Scared Straight” (into marriage!)

As Act II began we were treated to a hysterical rendition of “Always a Bridesmaid” as Kondrat decides that maybe bridesmaids have it better, aside from the awful dresses!

Parenting bits were cute with “The Baby Song” featuring Alex Weiss, Dinnan and Pauli as their vocabulary with a friend began to sound like nursery school. Very cute! Plus, the car trip was covered pretty accurately as Jason Brownfield and Jessi Jeane Eldredge took the kids for a ride “On the Highway of Love”.

“I Can Live With That” highlighted a sweet and slightly poignant moment as Eldredge and Gene Pincomb II met in a funeral home. Although both had lost a spouse, the idea of taking on a new companion featured nice harmony.

Desmond Sheppard on keyboard and Piaras “Peter” Kent on violin provided amazing musical accompaniment for this show. Where has this combo been?!! They are terrific! We surely hope to see them team up more in the future!