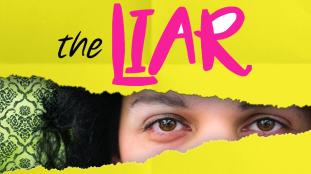 As truth, trust, honesty and their underlying integrity seen to have begun a slide down the proverbial slippery slope of late, perhaps a look at the possible comical consequences that could and often do result is in order. Indeed, the art of prevarication has been around for centuries.

Such is the stuff of the University of Michigan-Flint Department of Theatre and Dance production of The Liar. Written in the seventeenth century as Le Menteur by Pierre Corneille, it was adapted for the modern stage by David Ives who has updated it with fast-paced contemporary language but still delivered in verse.

We chuckled along with most of Friday’s opening night audience as we watched the Parisian romantic endeavors of Dorante (David A. Guster) first unfurl, then unravel, then rekindle again. Guster is foppish and flamboyant, yet intriguing in his posing and preening as he brags about his ability to lie his way into and out of life’s predicaments.

New in town – although he won’t admit it – Dorante finds a fellow looking for work as a servant. He has only one “flaw” – he cannot tell a lie. He is the perfect “conscience” for Dorante! Giovanni Moore III is terrific in this wacky, slapstick role. He opens the show, sets the tone, and then keeps the comedy coming throughout.

Enter two lovely ladies and their maid. Clarice (Ava Pietras) and Lucrece (Alyssa Banister) are strolling in the Tuileries when Dorante accosts them. Pietras is comical in her attempted rejection of this fellow. She is possibly engaged to the slightly whiney but still hotheaded Alcippe (Paul Gregor) and surely is not drawn to Dorante. However, Lucrece is interested even though he ignores her. Banister is the more regal of the pair and may prevail if all goes well.

As the maid, Isabelle/Sabine, Sandy Doll has her work cut out for her. She is the sweet Isabelle one moment and then the raspy Sabine the next! She makes these conversions smoothly and with ease.

When Alcippe arrives on the scene accompanied by his friend Philiste (Enrique Vargas), he greets Dorante, his old school chum, with gusto! Gregor does a fine job of portraying this character through his excitement, then his rage, and ultimately his love for Clarice.

Finally, Dorante’s father, Geronte (Trevor Allen) only wants his son to find a wife. His sole desire is to see Dorante settled down and giving him grandchildren. Allen does well with this older character as he tries to separate fact from fiction.

Director William Irwin’s troupe does a wonderful job of moving from place to place with very little set disruption. The gleaming emerald curtain is a centerpiece and the cast literally sets the scenes with their steady focus and pristine timing.

They handle the iambic pentameter verse with skill and comic aplomb. Rarely falling into excess cadence, they also manage to tweak the audience’s funny bone more often than not.

Costumes are wonderfully frilly and fine. The men outshine the women as they did in those days, with their wigs, broadly plumed hats, waistcoats, and even swords.

All in all, The Liar is worth a trip to UM-Flint if you like to laugh and think as well. The play continues through November 3. For tickets and more information contact the box office at 810-237-1530 or online at umflint.edu/theatredance .