Posted on December 7, 2019 by Kathleen Kirby 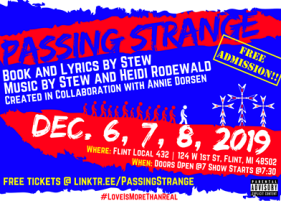 Friday night, a group of incredibly talented independent artists collaborated to bring forth a powerful, thought-provoking rendition of Stew and Heidi Rodewald’s Passing Strange. This Tony – Award winning musical can be challenging to produce because of its extremely ambitious score, and the physical and mental endurance it requires of its actors. Yet if Artistic Director Harvey’s brilliant rendition of this trip on existentialism were any indication, it would appear this troupe was more than up to the task.

Passing Strange follows a boy who is on a trip of self-discovery across Europe and who learns much about himself on the way. His story is told through a perfect combination of song and speech. The Narrator (Melanie Jones) was positioned on the stage left side of the stage segregating the narrator perfectly from the action. Jones provided stellar vocals and the perfect amount of swagger to bring this rock and roll storyteller to life.

We certainly appreciated the subtle parallelisms between the Narrator and The Youth (Harvey) with their matching bright yellow Keds, suggesting that our Narrator is more than just someone telling this story but someone who has lived it. Harvey, a veteran of the Flint Theatre scene couldn’t have portrayed this character more completely. Every movement was executed with beautiful precision. Her chilling vocals will leave you vulnerable, and her stunning characterization makes it look effortless.

Then there is the pivotal character of Mother (Carmen Brown). This character is difficult because most of the actions of The Youth are based solely on the dynamic between him and his mother. Brown does this role absolute justice. She is starkly funny in the role, and embodies all the caricatures the script has laid out for her perfectly. Seemingly able to capture all of the tenderness, Brown brings such an authenticity to the role that she may make you cry in this character that so many of us can relate to.

Rounding out the cast is an incredible ensemble consisting of Jonathan Mateen II, JoJo Bee, Re- C, and Lewis Clay. They work together flawlessly to set up the many difficult characters that must transform The Youth into the Narrator. While they were all phenomenal talents, notable scenes first included JoJo Bee, incredible as Mariana, and displaying significant acting prowess. Also, as Desi, Re-C was perfect. Maybe it’s the feminist in me, but the book has written some very powerful female characters, and the actors were up to the challenge. Jonathan Mateen II was especially notable as Frederick, the closeted preacher’s son who led the choir, and Lewis Clay as Christophe. The core was never more entertaining than in their huge ensemble song “We Just Had Sex”. This upended the entire audience at the extremely quaint Local 432 venue in the heart of Flint, Michigan.

If you are impressed by real theatre, and you wish to be moved by some pretty heavy art, get down to the Local 432 this weekend to see this incredible troupe accompanied by a remarkable ensemble of musicians (Anthony Fiemster, Ethan Martin, Tyler Robinson, and Tarrence Smith). The troupe and their band will blow your socks off. Bring tissues, and maybe a chair. Standing room only!

Passing Strange continues this weekend at the Local 432! Warning: The language is strong. There are also strong sexual themes present.